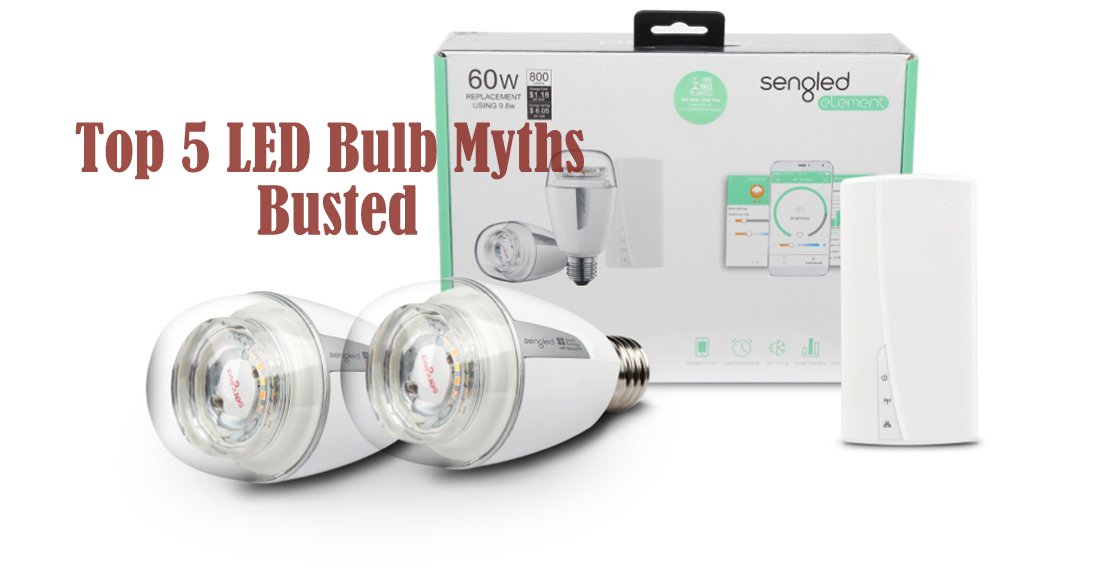 While smart LED light bulbs have truly been an astounding innovation there are plenty of misconceptions floating around about them. We thought we would take the time out to set the record straight about some of the common myths about LED lights with this blog post.

1. LEDs are not bright enough

This is one of the most common apprehensions that people have before they buy LED lightbulbs. What if they’re not bright enough? The truth is not only are LED bulbs brighter than their CFL and incandescent counterparts, they also consume less energy while doing so. Take the Sengled Everbright for instance, this 10W bulb manages to produce enough brightness for normal use and the battery fitted into the light bulb casing provides light even during a power outage for almost 4 hours. So not only do LED bulbs provide bright light, the smart lights from Sengled let you do much more with them.

We’ve talked about this in our previous blogs as well but let’s just reiterate what we’ve mentioned with an example. The Element Classic Single LED lightbulb costs $19 which might seem a little steep at first. Take into account however that it is a smart LED light bulb by Sengled. Control it from your smartphone, connect it to Alexa, Google home and I haven’t even mentioned the fact that it’s a carbon neutral light bulb. Every time you buy one of these bulbs Sengled plants a tree. On the other hand, the most popular CFL bulb on Amazon costs roughly about $13. Everyone knows that LED bulbs last longer than CFLs. The odds are, you’ll probably have to purchase 2 or even 3 CFL bulbs for the time one single LED bulb will last. I think you get the picture. Also, LED consumes less electricity. Lower utility bills.

3. LED lights are not safe

As per some myths about LED bulbs, the light emitting from them is not safe. This is absolutely false. LED bulbs are not like lasers. They don’t have a central focal point on which to focus their light. It is as safe to use as other CFL and incandescent bulbs.

4. Buying LEDs in the future will be cheaper as their price will drop

As with all technology with an increase in innovation, better production techniques, and new materials to use in production the price of the products will fall in the future. The timeline is very indefinite though. When the first smartphones were launched only the very wealthy could afford them. It’s obviously not the case now. The difference is everyone can already afford the Sengled Smart LED lightbulbs. For you to wait a couple of years for the price of the product to drop there needs to be a significant drop in the prices. This is just not going to be the case in the foreseeable future.

We are sure of the fact that LED bulbs last a really long time. We have a long-lasting LED bulb we’ve actually named Sengled Lifetime. We’ve fitted it with and LCD screen which tracks and displays the number of hours its been in use for. But will the LED bulbs last forever? Unlikely. Despite our best efforts, we’ve only been able to make them last your lifetime, but forever could be much longer than that.

We hope this myth-busting blog has helped shed some light on the common misconceptions about LED lights. While we hope to fully succeed in dispelling all the myths about LED’s we won’t be able to do so without your help. Share this blog on your socials, refer your friends to our website for the most accurate information on LED bulbs. If you know of some more common myths floating around please do let us know.